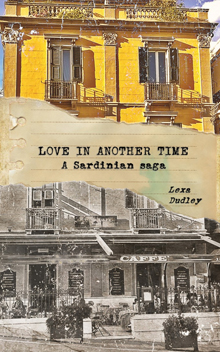 Lexa Dudley’s Love in Another Time. A Sardinian Saga is a moving tale of loss and redemption, weaved into a picturesque and captivating setting. It’s the early sixties and Ellie, fresh out of school, moves to Sardinia with her parents, where her father has been assigned by the British Foreign Office. Ellie’s free spirit and generosity are hampered by her parents’ extreme ambition and rigid ways. That doesn’t stop her from satisfying her curiosity about her new surroundings and her desire to explore and mix with the locals, making new friends along the way. Her wish to improve her Italian leads her to meet the man of her dreams. But fate isn’t kind to Ellie, dealing her a terrible blow. Many years later her granddaughter Sara’s career brings her to retrace Ellie’s footsteps in Sardinia and, in finding her own true love, Sara unlocks a secret that shatters her world.

If with this novel Lexa Dudley’s intent was to entice readers into falling in love with Sardinia, she has succeeded! Love in Another Time is an engaging story, the sort that grabs readers and draws them in from the first pages, eager to know more. Ms. Dudley portrays places, people and local folklore with such precision and clarity it’s easy to be drawn into the intricate tapestry she weaves. The abundance of historical and cultural anecdotes and true-to-life characters bring the landscape to life. Just when I thought the ending was a foregone conclusion, a clever twist took me completely by surprise. Love in Another Time is an excellent read and I’ll most certainly recommend it to my friends.

Ellie Montford’s parents, Ian and Isabel, spent most of their time traveling, as Ian worked in the diplomatic corps. Ellie’s best friend, Polly Smythe, and she attended the same boarding school. Ellie was always welcomed in the Smythe home, and she also became a close friend to Polly’s brother, Simon. In 1961, when Ellie was twenty years old, she joined her parents at their last assignment before her father’s retirement; Sardinia. Ellie became enchanted with the unique beauty of the island and its fascinating people. She also fell in love with Gino, a professor at the local university. Several decades later, when Ellie’s granddaughter Sara travels to Sardinia for her job, she learns some family secrets. In Love in Another Time: A Sardinian Saga, written by Lexa Dudley, a story of family and friendship connections between England and Sardinia unfold.

This novel is intriguing in many ways – the after-effects of World War II in Europe; the archaeological treasures in Sardinia; societal norms of the 1960s compared to the present time. Also explored are family relationships. Ellie created a close-knit family although she had been raised by a mother who was distant and more concerned with the status she and her husband could achieve. There is much joy and pain in the story. The author’s storytelling flows well, and she describes the landscape and the eras with clarity. Although many characters are introduced and developed, the reader can easily grasp the personality of each one. Author Lexa Dudley has written a lovely novel in Love in Another Time: A Sardinian Saga. An enjoyable read!

Love in Another Time: A Sardinian Saga by Lexa Dudley is a brilliantly plotted story that follows a grandmother’s adventure and the story of her granddaughter. It begins with Ellie Montford’s early years. Her parents are diplomats who are scarcely home, and when her school shuts down, she is sent to live with Polly’s family, a family who accepts her as their own child. When she turns twenty, Ellie is asked by her parents, who are looking forward to retiring from active service, to join them on a vacation in Sardinia. It is here she falls in love with Gino, a professor, but the experience is short-lived. Sara is Ellie’s granddaughter and she has a strong bond with her. When Sara travels to Sardinia, she uncovers a disturbing story about her grandmother, and this might stand in the way of her own happiness.

Lexa Dudley is a great storyteller who uses an evocative style of writing to grab the attention of the reader. The prose itself has a beauty and a music of its own. The childhood of the characters is beautifully painted, and the images will fill some readers with nostalgia for the children they once were. Character development is wonderful and readers can easily feel these characters, especially in moments of their sadness and human frailty. They are as human as they are realistic, and this makes the story feel real to readers.

Love in Another Time: A Sardinian Saga has a well-crafted setting, with places that are skillfully described and a timeline that lets readers know when the actions took place. It is gripping and delightful.

The Whispering Wind by Lexa Dudley is set in the idyllic island of Sardinia in the Mediterranean Sea, where history and culture abound. Elise originally booked a holiday in Sardinia with her husband but his violent behaviour finally breaks the last straw of their troubled marriage. Prodded by her solicitor, she decides to go ahead with the holiday alone to have some peace. This decision will change her life forever as she is embraced by the Sardinian culture and becomes enamoured with the place and its people. She falls in love with a Sardinian, Beppe, and everything seems to be fantastic. This is until the day she has to face the reality waiting for her in England and in Sardinia itself. Will Elise finally find the happiness that she has always been looking for?

Author Lexa Dudley is a romantic novelist who certainly knows a thing or two about love. Her writing style is not that original but she knows how to build up the plot in such a way that the reader cannot help but be captivated by the story. She has an excellent descriptive style, painting the island on the book’s pages like a visual artist painting on a canvas. As a result, I felt like I was transported to Sardinia and experienced the island myself. The Whispering Wind has all the elements of a successful romantic novel and even more. Reading this book is like going on an emotional roller coaster ride of love, hate, sadness, and joy. The story tugs at the heart, the characters are well developed, the plot is interesting and the setting is perfect. What more can a reader ask for?

“Love never dies a natural death. It dies because we don’t know how to replenish its source. It dies of blindness and errors and betrayals. It dies of illness and wounds; it dies of weariness, of witherings, of tarnishings.”

The Whispering Wind is a moving story of two lovers, set on the beautiful island of Sardinia, where Elise goes on holiday to escape a loveless and violent marriage. Whilst there, she meets and falls in love with Beppe, a local Sard. Despite religious and cultural complications, they embark on a romantic and passionate affair. Beppe shows Elise his island and introduces her to the welcoming culture of the Sardinians and Elise soon falls under the spell of both the island and its people. But after weeks of blissful happiness, Elise has to return unexpectedly to England to face all the problems she had been so desperate to leave behind.

The Whispering Wind is that kind of book which will bring out the deepest pain from our soul and will manage to transform that pain into something beautiful and memorable. Since that is how I felt when I read the book.

Elise, a young and married English woman, take a trip all by herself to an Italian island, Sardinia. To get away from her abusive husband, William, Elise decides to take a break from her marital issues before going for a divorce. But her stay at Sardinia turns out to be something enchanting and fateful for her. Not only Elise was struck by the beauty of this small and lonely island, but also fell in love with the warmth of the local people of Sardinia called, Sards. Little did she knew that her trip to Sardinia would turn out to be lucky for her, as she fell head-over-heels-in-love with a local Sard, Beppe. Their love was not something filled with lust and passion, but their love was something pure and deep with intensity. But Sard people are quite traditional and since it was 1969, modern values like getting married to a divorced woman was still not acceptable in the society. Their love story comes to a halt when Elise had to return back to England due to her mother’s illness, but will she come back? Will they find each other in their arms?

The author have spun a heart-touching and deeply moving love-story. The author’s portrayal of this island, Sardinia makes me feel like she loves this island like her own home. With her eloquent words, I too can feel the warmth of the Sards like Maria, and the rest. The picture of Sardinia that she painted with her words is vivid, lively and very visual. I was not only transported to the picturesque island, but I could sniff the salty breeze and the sweetness of the wine on my tongue. I could even hear the birds singing and the waves crashing by the shore. And as Beppe and Elise’s love story evolved, Sardinia bloomed like a flower.

The author did a great job on crafting the characters with depth and compassion. And their warm demeanor will make you feel like as if you are home. Elise, the main character, is strong willed woman, who fought a lot in her life, yet she stood still. Their narrative is striking and captivating. The prose is articulate and evocative with a rather fast pace. And the plot unraveled like something you need to devour for a longer time, rather than reading it in a haste, since the plot is constantly evolving and the beauty of Sardinia along with Elise’s pain and sorrow keeps us engaged to the sore of the story. The chemistry between Beppe and Elise is not lusty yet it’s very enriching. The emotions are strongly depicted with intricacy. The first part of the book is enchanting yet poignant, and in the second part, there is a mystery to unlock, although, we know the real culprit who caused the pain between Elise and Beppe, but the way the author unraveled it, made us gripped to the story. And surely, the second half brought a lot of tears to my eyes. I started hating the author for turning her story into something irrevocably painful.
All in all, Sardinia’s beauty will bewitch you and the book will make you itch to take a trip to this elegant island, Sardinia.

Verdict: This book proves why pain demands to be felt and if you want to experience a unique combination of beauty and pain, then do read this compelling love story.

Courtesy: Thanks to the author, Lexa Dudley, for giving me an opportunity to read and review her book.

Children of the Mists

Thank you for the opportunity to read and review this book. This is a beautiful book the author has created such a detailed account of relationships and beautiful Sardinia.  Children of the Mists is a beautiful story consisting of an interesting plot with lovely characters in love in 19th Century Sardinia.  I think that this book would be a great sunbed read or, like today, sitting by the fire warmed by some hot chocolate. I cannot believe I have never come across this author before and I am now seeking her out.